A copy of a copy

This was a piece of advert I did for a company called Jupiter Advertising. The task was to create a recruitment advert for a mayor in Manchester. 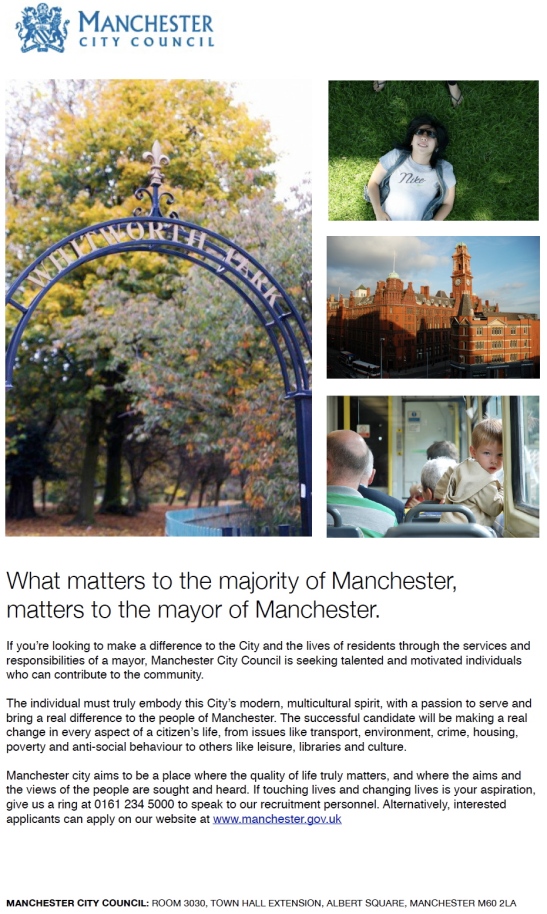 When I was little I told my parents I wanted to be an author, because that was the only form of writing I knew from reading at a young age. The colloquial term for this was ‘sia chek’ (literally: write book) and my parents were sorely disappointed wondering how my bread and butter could be dependent on the masses’ subjective tastes.

At university, I dabbled with the idea of working in advertising, for there was such a thing as a copywriter. These are people who write the copy – the words – in an advertisement. But copywriting requires far more than just writing headlines and slogans, it involves creativity, concepts, designs, ideas – the whole package.

Like any job, it involves a lot of disappointments. Your copy could be shredded, re-written over and over again to suit the client’s whim. It is a difficult job, and advertising is an industry I’ve heard being described as ‘arrogant’.

As the TV show Mad Men proves, the ruthlessly competitive men and women of Sterling Cooper Advertising Agency in 1960s New York will do anything in the boardroom (and the bedroom) in their bid for self-interested success.

And so I went on to apply for copywriter roles but knew ultimately that it wasn’t for me, hence my half-hearted attempts in applications.

There are two forms of writing: fiction and non-fiction. Fiction is imaginary; creative and illusive. Non-fiction is truth; honest and unmerciful. Copywriting borders the two, but truth is all I’m interested in.

This entry was posted on March 4, 2009 by wanphing and tagged ads, movies.