Afternoon with Grandfather
Today is a day set aside for Grandfather, who is the other Grandpa. Grandfather is a no-nonsense character, an educated product of the British schooling system of Malaya in the 1920’s. Strict, disciplined and intelligent, he is a far cry from Grandpa, a quiet uneducated labourer who hates nothing but giving his opinions on politics or young people.

An afternoon was spent with Grandfather and Grandmother, who chauffeured Small Sis and I in their 1990’s boxy Mercedes around Georgetown. Georgetown is now a UNESCO World Heritage site, and I feel giddy with excitement at the thought of being a tourist in my own hometown. 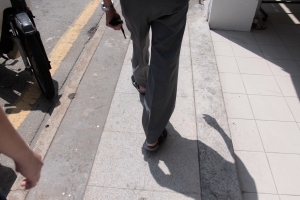 Walking around Georgetown; life with Grandfather could mean following quickly behind his regimented footsteps

Goo bak koay teow is made with thick flat noodles in soup, with beef balls and beef slices, sprinkled with coriander and bean sprouts.

Grandfather asks what we would like to eat, and I shout “Goo bak koay teow!” (beef noodle soup) almost instantly. He takes us to one of Penang’s most famous in Chulia Street. Sis and I slurp them down, famished like Oliver Twists under the watchful eye of Grandfather.

Soap operas and real-life dramas
After lunch, we spend the afternoon visiting Grandfather’s new apartment near the university area. The seafront and hillside views are fantastic. After a tour of his new abode, we sit through the mandatory three-hour Taiwanese soap opera on daytime TV. Grandfather and Grandmother launch into a debate on whether Taiwanese soap operas have any cultural relevance to overseas Chinese like us. Grandmother makes fun of their accents, and Grandfather launches into a defence of “knowing our roots”. Fortunately for Small Sis and I, the drama on TV (and in real life as the heated debate went on and on) lasted only 30 minutes, as we were called home for dinner by Tom and Jerry.