The Queen is here
Today is the big day. The queen is arriving from Melbourne – the firstborn of the seventh generation. She arrives in the morning, and everyone is fluffing over her, kissing her, cuddling her. Everybody loves the Queen. The Queen’s mother is even happier, for tonight she gets to parade her newborn around at her friend’s wedding.

Wedding #1: Tian Tian Restaurant
I am excited about my first Malaysian Chinese wedding in a long time. The bridegroom is my hairdresser, and he’s holding it in a Chinese restaurant inside a hotel.

It’s been years since I attended one, and I’m ready to relish in the extravagance of a 8-course wedding dinner. Typical Chinese wedding banquets start with the Four Seasons dish. The Four Seasons is a mixed plate of four dishes to represent each season. If you like, it is the Quattro Stagioni of Chinese dishes.

The second dish is always the shark’s fin soup. It is a brownish cloudy soup with crab meat, served with black vinegar. Due to its extortionate price and ethical controversies, shark’s fin soups are very rarely made using real fins. Most are replaced with glass noodle-like strands that resemble the fins. 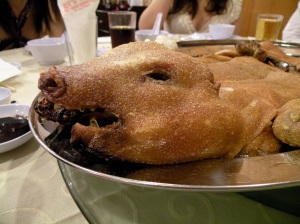 The third dish is usually a meat – they could be chicken or the suckling pig, like this one above. The suckling pig is roasted until it’s extremely crispy on the outside, with the meat still soft inside. It is usually served with steamed mini mantous (bread dumplings) on the side, dipped in black plum sauce.

The fourth dish is the prawns – the messiest and most labour-intensive. When we were tiny, Dad had the job of peeling prawn shells while we sat by and waited for him to drop the ready-to-eat prawns on our tiny plates.

The fifth dish would then be a fish. This is my favourite because it is light and fresh. Most tables finish this, as it is also the more expensive dishes.

Everything but the head and tail for me, thank you

The sixth dish would be a vegetable, usually black Chinese mushrooms with ‘abalone’ (real or faux), served with pak choi. A personal favourite after all that meat.

The seventh dish according to Dad, is the emergency dish – the rice. It is served in large quantities, either as yam rice or fried rice to bulk up whoever is not full by now.

9 out of 10 times they go to waste, because it is impossible for guests to still be hungry at this stage. It is implicit in this culture that more is better, for fear of under-serving your guests.

The eigth and final dish is of course dessert, usually an iced longan or lychee syrup. I really enjoy the food at wedding dinners, if only there wasn’t so much waste.