DIY photoshoot
Today is family photoshoot day. Now that the entire clan is in one place at one time, we cash in on the opportunity for a full family portrait. Except because we are kiamsiap (stingy/frugal/scrooge) Penangnites, we decide to go DIY.

Instead of heading to Bee Nar Studio where they provide ceiling-to-floor Chinese garden backgrounds, as part of its gaudy green screen collection, Sis and I decide we are going to do it ourselves. Vintage-style.

So we head to the Gelugor House, because there is nothing more vintage than this heavy block of sliding wooden doors.

Many people don’t understand the concept of vintage. They think it is a shiny clothes section in Topshop. But true vintage is dusty and can cause asthma. Lizard droppings and lizard egg shells are also commonly present, as is the case with this wooden door.

Having to fit others’ schedule in, we set the time at 2pm, which isn’t ideal because it is too hot. The Queen baby is sweating and screaming on Grandmother’s lap, but we all force a smile as the shutters click. Cheeeeese. *fopp*

An hour later, we retreat under the ceiling fan for coffee and biscuits. But not long before we hear ice-cream bells. 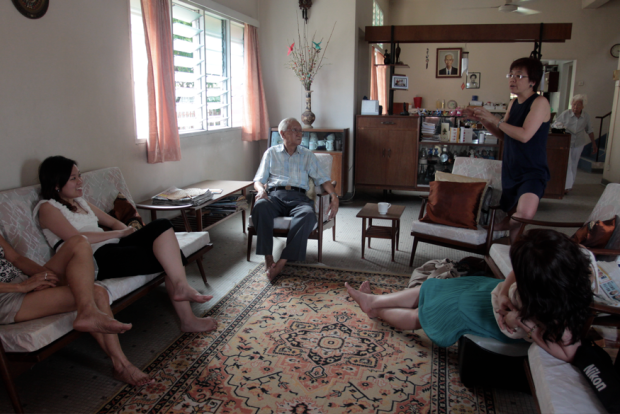 Every child’s ice-cream man
We hear ice-cream bells ringing and the faint motorcycle engine drumming. Like Pavlov’s dogs, Cousin and I get up and rush outside the house. I am giddy with excitement at the thought of ‘catching’ the ice-cream man. Because if we don’t ‘catch’ him he will run away and we will have no ice-cream.

“He’s gone!” I exclaim as we reach the gate. The ice-cream man is nowhere to be seen.
“Shhh, I can hear his motorbike,” Cousin assures me. “He usually comes round again when he gets to the end of the road.”

The ice-cream man stops his bike and slowly gets down. He is so old and skinny, I wonder how he balances the weight of his metal ice-cream crate on the back of his motorbike. He whips out the picture menu – Magnum, Cornetto, Walls – but we say we want the “special”.

Kaypochis: Cousin and I look into his ice-cream box

“It’s yam today,” he says. “I made it myself.” Cousin and I peer into his ice-cream box like busybodies and watch as he scoops them onto wafer cones for us.

I hate yam, but I love ice cream. More so, I want the experience of reliving my childhood, when we would dash out of the house at the sound of ice-cream bells. What a highlight of my time here.