The London Institute of Contemporary Christianity (LICC) had an open library yesterday in their centre near Bond Street Station. It happened I was in London for a journalism workshop (thank you Lord), so I popped in and found treasure: 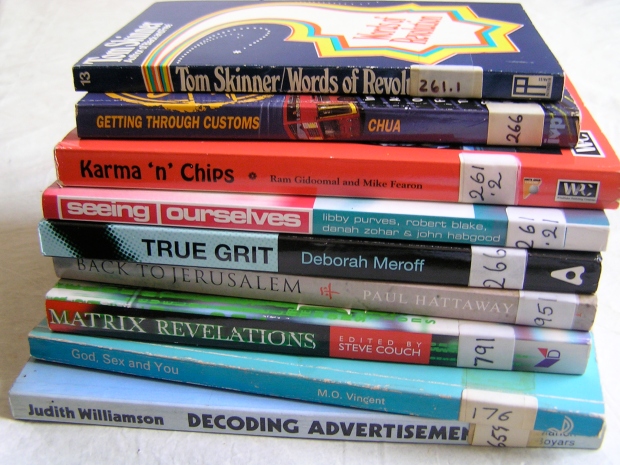 It may appear as though LICC is having a massive clearout of their old books, as some of these were published decades ago. But I think the best part about God’s message is that they withstand time. A lot of the cultural examples used in these books would no longer be true today, but the solutions proposed and the message by the authors would still be relevant.

I can’t wait to read all of them, because I am just so interested in engaging with contemporary culture from a Christian perspective – advertising, racism, nationalism, travel, The Matrix (??)

The LICC was founded by John Stott in 1982. Its purpose is to teach and equip Christians, leaders, churches and organisations to engage with issues they face in today’s world.

The LICC runs a five-day intensive course called Toolbox, which I got a £300 scholarship to attend in June 2009. This is what I had to say about the course:

Toolbox has helped me as a Christian to understand and engage with the world around me. Previously I judged, criticised and abstained from understanding things deemed ‘unholy’, but now I have compassion and know I have to change the culture around me. The challenge now is to learn to live in the world, but not of it.

Toolbox has taught me to see God’s omnipresence in contemporary culture. Visits to HMV, Tate Modern, the cinema to watch Star Trek and a tour around Christian London opened my eyes to his creativity manifested in art, architecture, design and films.

Two books that were recommended, Hollywood Worldviews by Brian Godawa and Amusing Ourselves to Death by Neil Postman, has really taught me to think beyond the apparent – the meaning behind the movie, the postmodern worldview – in order to understand the world I live in.

Toolbox was fast-paced, intelligent and thought-provoking. I enjoyed the creativity and the intensity of the course. It was of a very high standard, quality teaching and has propelled me to be excellent in everything I do. It was better than going to university!

I now realise there is so much God wants to do through me in media, to bring his glory through the stories I write and the interviews I conduct on my radio show.”

And that is all I have to say about that (in true Forrest Gump fashion).