Guy & Hugo. They sound like the new Dolce & Gabbana. But no no no, this is a secret paparazzi frenzy in a Melbourne café, as seen through the eyes of my two sisters. 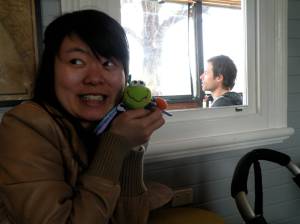 How sneaky is that??
Pretending to take pictures with cute toys when really, it’s the cute guy behind the window 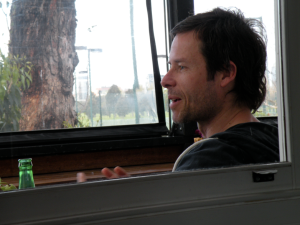 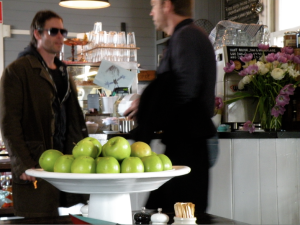 Even when they get up to leave and try to be inconspicuous, you play the race card and pretend to be Asian girls snapping photos of… apples

So apparently Guy Pearce hangs out with Hugo Weaving. If you don’t know who they are, shame on you. IMDB them. Or maybe they’re just not that famous if they are allowed to roam free on the streets of Melbourne. I say, if Noel Gallagher gets on the Magic Bus and sits down next to me, I’d probably think he was a chav and try not to look his way.