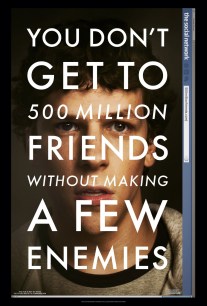 To commemorate the movie The Social Network released today in UK cinemas, I have decided to deactivate my Facebook account!

Following in the footsteps of Andrew Garfield who plays Mark Zuckerberg’s betrayed co-founder, Eduardo Saverin, I have decided I would rather spend more time reading books, magazines, watching DVDs and hanging out with physical flesh and bodies.

Facebook is not evil, but it is a far too easy distraction to fall into, thanks to its accessibility just one click or tap away! Also, I have been monitoring my usage in the past 3 months and found that it has made me less productive at work, which consists of online research.

I have also left Twitter, because despite selectively following only a meagre 47 people, my news feed (as with Facebook) consists of a series of random and unconnected blurbs. They slowly merge into mere data and my eyes are scanning, not processing any useful information. It’s a bit like being God in Bruce Almighty, when Jim Carrey goes mad from hearing everyone’s thoughts and prayers.

I think I care too much about my brain to do that.

I am unable to cite this quotation, but someone described Facebook once as “a fancy bookshelf where you can put things – books you’ve read, movies you like, photos you’ve taken, diary entries you’ve written, events you’re attending and links to cool stuff online so you can show them off to visitors.”

So I think this is a good and wise decision for me. I might go back to it in the future (as Facebook says it’ll miss me) but for now I am enjoying freedom and frolic in reality!

The Social Network is released on 15 October in UK cinemas.