Today I rummaged through the letters I’ve kept since childhood and found this really interesting piece of work. In July 1998 I was 12 and sitting for my Primary 6 national exams. I attended after-school classes at a certain teacher’s house, where there were also boys from other state schools. One in particular, J wrote me this: 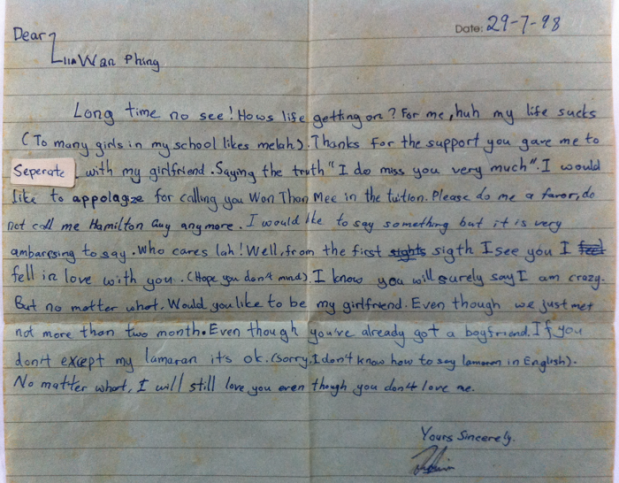 I gotta say, this is some funny and fantastic writing. Love the spelling mistakes, misuse of punctuation, Malaysian slang like lah and lamaran (Malay word meaning proposal) and the promise of unconditional love.

This letter was delivered to me by hand, by a messenger on a bicycle, a so-called ‘best friend’ S, who lives down the street and who is also J’s school mate. J let S read this letter before passing it to me, so it was no longer Private & Confidential as stated on the envelope.

Sadly, I did not accept his lamaran. A browse through J’s Facebook photos tells me he is doing well with the ladies in his life. I hope he does not feel embarrassed by this publication – it’s actually quite cute and is a good look into a 12-year-old’s mind.